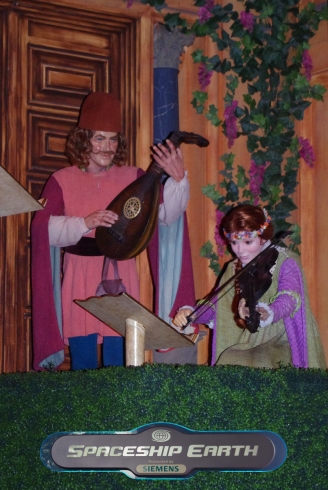 Dwight D. Eisenhower as a Mandolin Player
Franklin Pierce as a Scholar
James Buchanan as Johannes Gutenberg
Andrew Jackson as Gutenberg’s Printer Assistant
John Adams as a Monk
John Tyler as a Turk
Teddy Roosevelt as a Roman Senator
William Taft as an Egyptian Priest
Zachary Taylor as a Centurion

Let’s take a look at a few of my favorite repurposed presidential animatronics. Here’s Buchanan as Gutenberg and Andrew Jackson as his assistant:

I wonder what Zachary Taylor would think of himself as a Centurion. I think it suits him well.

Here’s Franklin Pierce getting in some much needed studying.

John Tyler pops up here as a Turk.

Those are just a few of the recycled President animatronics. Makes you wonder where the Trump one will end up. Anyone have some ideas of where you’d like to see it? Let me know. Til then, try and spot some of these former presidents on your next trip to EPCOT’s Spaceship Earth.