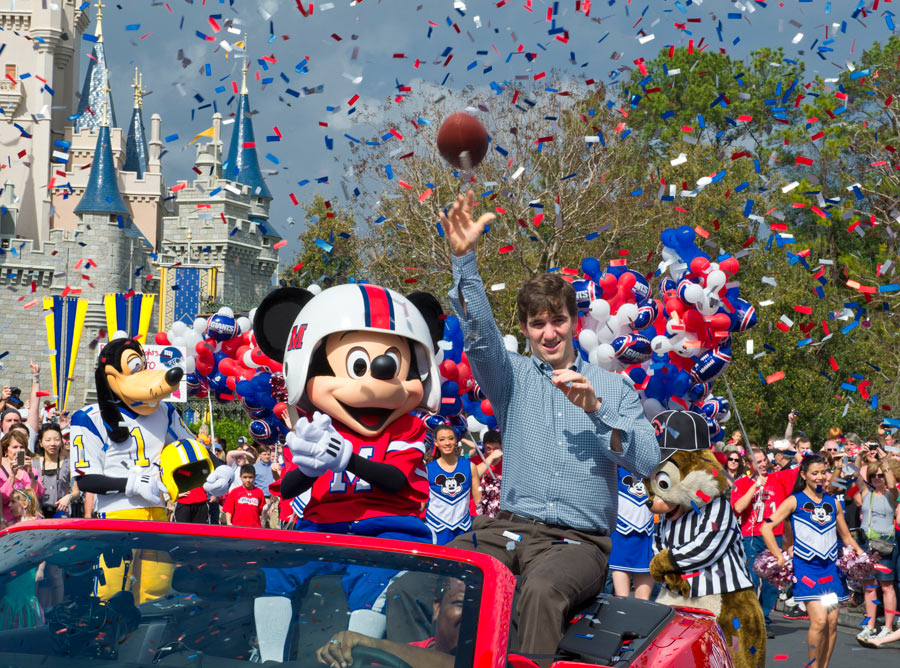 It’s become a yearly tradition we all look forward to after the Super Bowl. The Disney commercial featuring the star player from the winning team looking straight into the camera as “When You Wish Upon A Star” is playing and answering the question “What are you going to do next?”. The answer is always “I’m going to Disney World (or Disneyland depending on the version shown in your area.)

How did this tradition come to be? Well, we have to go back to 1987 and then Disney CEO Michael Eisner and his wife. At a grand opening dinner for the new Star Tours attraction in Disneyland in January 1987, Eisner and his wife were with Dick Rutan and Jeana Yeager. They were the first pilots to fly around the world without stopping. In a 2015 Sports Illustrated interview, Eisner talks about the dinner and the creation of the slogan:

“In January 1987, we were launching Disneyland’s Star Tours, an attraction based on Star Wars. After the ribbon-cutting ceremony, my wife, Jane, and I had dinner with George Lucas, as well as Dick Rutan and Jeana Yeager, who had just become the first people to fly around the world without stopping. It was late and the conversation hit a lull as we waited for our food. So I asked Dick and Jeana, ‘Well, now that you’ve accomplished the pinnacle of your aspirations, what could you possibly do next?’ Rutan responded, without hesitation, ‘I’m going to Disneyland.’ And of course I go, ‘Wow, that’s cool! You made the right choice.’ But my wife interjects: ‘You know, that’s a good slogan.'”

During this time, the NFL playoffs were going, and the New York Giants were going to face the Denver Broncos in Super Bowl XXI. Disney had to act quickly to make this happen. Eisner called NFL Commissioner Paul Tagliabue, who loved the concept agreed to allow Disney to have a camera crew on the sidelines so they could have immediate access to the player right as the clock ticked to zero. Disney decided to offer each team’s quarterback, Phil Simms of the Giants, and John Elway of the Broncos $75,000 to say the line if their team won. Simms was hesitant at first, but upon hearing that Elway agreed, he did as well. Good thing he did, since the Giants defeated the Broncos 39-20 and Simms got to say the famous phrase and receive a nice payday. Although he didn’t quite say “I’m going to Disney World” in the commercial and instead says “I’m gonna go to Disney World.”

Ever since then with the exception 2005 it has become a Super Bowl tradition, and the player always makes good on the line by actually going to Disney World or Disneyland. A parade is held in their honor with Mickey and friends joining in on the festivities.

To this day, it still gives me goosebumps to watch these commercials year after year – hoping that one day a player from my favorite team, the New York Jets will get to say those magic words.

If you’d like to see even more about it, here’s a video I put together about it: